Skateboarding has been a welcome distraction lately, especially since our normal snowboarding training grounds are totally focussed on earning the big bucks on skiers… On top of that it’s only a 10 minute drive from my current home location, but this will soon change to a 35 minute drive from my new home – Yes I’m moving from Veldhoven to Uden!

The last 4-6 weeks I have spent about 4-5 hours a week at Area 51 Skatepark in Eindhoven. Just to get back into skateboarding better and up my game for snowboarding at the same time. Although some tricks are only for skateboarding, they are of course just as interesting to learn as new snowboard tricks. The added value from skateboarding for me is that my balance and strength gets on a higher level and now after a week or 6, I’m curious to see what it did for my snowboarding. But since I have a busy schedule ahead – because I’m moving – I’ll have to see when I can put my head in the snow again. So hopefully I’ll be out there soon riding the snow and report about it here more regularly again. 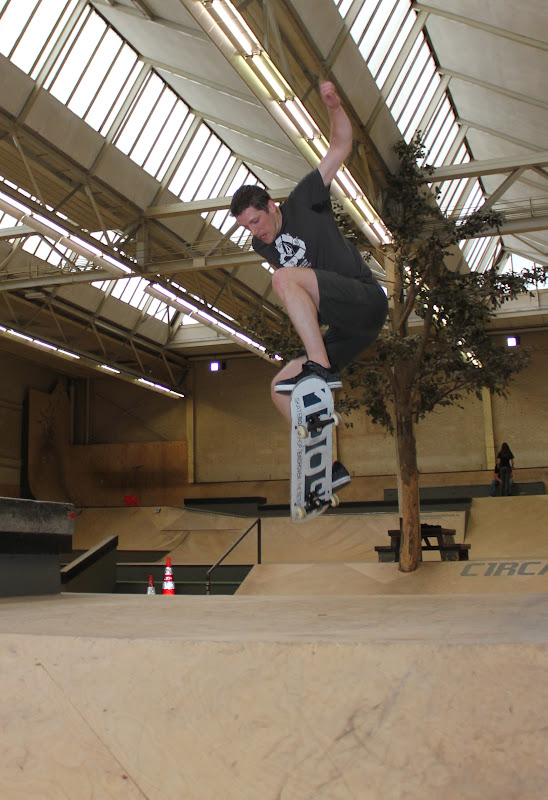 Back to skateboarding » As it is easy to get overwhelmed by the strong skaters at Area 51, which are always around and very inspirational to watch, it sometimes is hard to stick to you’re own progression. Even though I learned a lot since we started in August this year! When I look back – all I really knew, was how to ollie and manual… Ever since the addiction to learning new skills was at a maddening rate… Now only 3 months later I’m pleased with the stuff I’m capable of doing. Last week for instance was the first ever Heel Flip I landed, although not yet done whilst moving it’s a comforting thought to know I can land one. Same goes for the kick flip, now knowing I’m able to perform such a trick it just comes down to practicing it more! My ollies at Are51 are getting some more airtime and height now, as well as the higher comfortable speeds I’m cruising around through the park. As well as small wall rides and some 50-50 grinds on the lowest box around. Ollies onto obstacles is getting more comfortable and easier each time I’m around. All-in-all I’m loving it!

Personally I like the culture and respect towards each other in the Skate-scene far more than I’ve experienced it in the snowboard scene. In my view skaters size up each others level and show respect towards the new things you’re killing at your own level. Even tho sometimes when asking about some trick or how stuff’s done – it all comes down to just doing it. So ending up body slamming into the wooden panels at Area51 has been the occasional hazard as well the past 6 weeks ;).

Something that feels right out your comfort zone is usually the most rewarding when you finally get that one trick down. During the skate lessons at Area 51 Skatepark I had the opportunity to dig up such a trick again: a Nose Stall. A year ago we practiced the tail stall to revert and that […]

As I write this, my muscles are constantly reminding me why I had such an awesome weekend-trip. Jorg and I planned a weekend of extreme sports at Center Parcs at Kempervennen. This particular Center Parcs features both an indoor snowboarding center and an outdoor wakeboarding center. A perfect setting to expand our abilities in snowboarding, […]

Eyes focused on the green-ribbed-tube, placed down-hill in the same incline as the hill. Gauging for a speed that I’m still comfortable with doing a new trick. Dropping in switch doing a half-cab into a backside 50-50 felt actually really comfortable. This was a first I had done that trick and got it down first […]

By continuing to use the site, you agree to the use of cookies. more information